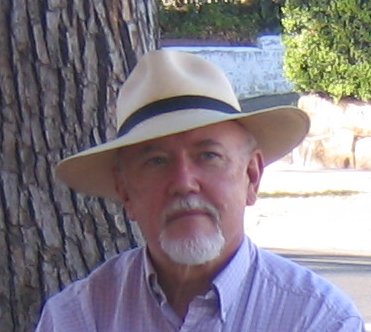 THE BASICS
I was born on October 19th, 1947 in the hospital at March Air Force Base just outside Riverside, California. My father, Norman, was a career sergeant who'd served as an aircraft mechanic and infantryman in the Philippines campaign early in the war and was taken prisoner on Bataan. My mother, Agnes, was a nurse at the hospital where he was sent to recuperate after the war was over.

Until I was fifteen, I lived on or near a number of Air Force bases in this country and in Germany. My sister, Patricia, was born in 1950 at Travis AFB.

I made some occasional stabs at writing and submitting manuscripts in my twenties and thirties. When I turned forty-seven, I decided to start writing things more regularly. I've been doing so ever since.

THE BOOKS
My first published novel was Lightning Time, which came out in 1997. I don't remember why I decided to write about John Brown and the Harper's Ferry Raid. All I recall about the idea for that book is that I wanted to write about a close family, the Worths, having just finished writing about a totally dysfunctional clan in my unpublished story Persistence of Vision. The most interesting part of writing Lightning Time was doing the research on John Brown, and trying to figure out who he really was and what he had intended to accomplish by his attack on the arsenal at Harper's Ferry.

About that time, I wrote Grandy Thaxter's Helper (2004). That book came to me in a funny way. I was looking over the new picture books on display in a library where I worked occasionally, and I saw one whose title made me think it was the Grandy story. Instead, it was some lame thing about a dog barking. "Okay," I thought. "I'll write it." And I did, in about two weeks. But it took nine years for it to finally be published.

After Grandy, I didn't have another book accepted for publication until 2002. I just kept writing and sending things out. Finally, Delacorte took my novel Vampire High, and it came out the next year. If you want to know how I got the idea for that one, go to ﻿FAQs.﻿
Most recently, I've finished a novel called Smoking Mirror about a young man who meets the artist Paul Gauguin in Tahiti and becomes his friend. It's due out in 2005. That one got started when an editor called me from Watson-Guptill publishers and told me they were starting a new series of novels for young people called the Encounters in Art series and asked if I would be interested in doing one. This turned out to be the hardest job of writing I've ever done. My first manuscript was so bad it was unpublishable. It was so bad I apologized to the editor for wasting her time and tried to quit. But she asked me to talk to a new editor she was hiring to help with the series, and she basically refused to discuss that possibility. So I did it over very differently and it worked. At least it's very much better than it was.

I like to work on more than one thing at a time, usually. At present I'm working on a novel about the Spanish-American War, a sort of comic science fiction story set in West Texas, and another novel for the Encounters in Art series. It will be a sort of ghost story told by the American painter John Singer Sargent. Whether any of these will ever see the light of day remains to be seen. My job is to write them, and take my chances. I try not to worry too much about whether they get published or not.